An evening with Satish Kumar: living in a time of ecological crisis 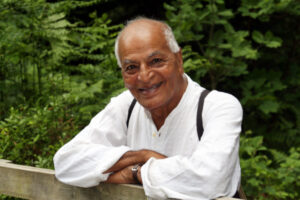 EKKLESIA IS PLEASED to be collaborating with the Edinburgh International Centre for Spirituality and Peace (EICSP) in an online seminar featuring the renowned ecologist, writer and nonviolent activist Satish Kumar.

The topic for the evening is ‘What Works and What Doesn’t Work: Resources for Living in a Time of Ecological Crisis’.

The event will take place via Zoom on Saturday 26 June 2021 from 6.45pm to 8.45pm (BST). Booking is via registration at the foot of the information page here (and at the end of this article). Ekklesia director Simon Barrow will chair the evening, and there will be an opportunity for questions and comment.

Who is Satish Kumar?

When he was only nine years old, Satish Kumar renounced the world and joined the wandering brotherhood of Jain monks. Dissuaded from this path by an inner voice at the age of eighteen, he left the monastic order and became a campaigner for land reform, working to turn Gandhi’s vision of a peaceful world into reality.

Fired by the example of Bertrand Russell, Kumar undertook an 8,000-mile peace pilgrimage, walking from India to America without any money, through deserts, mountains, storms, and snow. It was an adventure during which he was thrown into jail in France, faced a loaded gun in America and delivered packets of ‘peace tea’ to the leaders of the four nuclear powers.

In 1973, he settled in England, taking the editorship of Resurgence and Ecologist magazine, a poition he held until 2016. He is the guiding spirit behind a number of ecological, spiritual and educational ventures in Britain. He founded the Small School in Hartland, a pioneering secondary school for children aged 11-16, which brings ecological and spiritual values into its curriculum. He is a co-founder of Schumacher College, a residential international centre for the study of ecological and spiritual values and is a Visiting Fellow.

Following Indian tradition, Satish Kumar undertook another pilgrimage in his fiftieth year. Again carrying no money, he walked 2,000 miles to various holy places across Britain – Glastonbury, Canterbury, Lindisfarne, and Iona. Meeting old friends and making new ones along the way, this pilgrimage was a celebration of his love of life and nature.

In November 2001, he was presented with the Jamnalal Bajaj International Award for Promoting Gandhian Values Abroad.

In 2008, Satish Kumar presented a 50-minute documentary on the BBC as part of the Natural World series. In the programme he introduced the Dartmoor scenes and sights that most inspire him and contemplated the lessons they hold for humanity. This highly acclaimed documentary, blending eastern philosophy with the western landscape of Dartmoor, was watched by over 3.6 million people.